Wind In the Willows 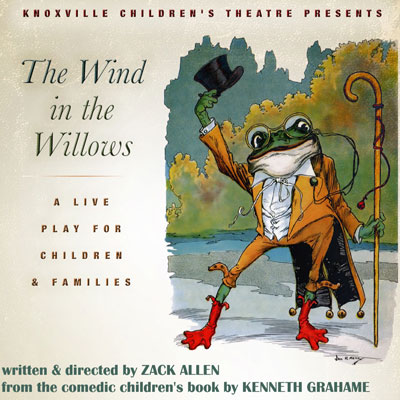 Wind In the Willows

Knoxville Children’s Theatre will present the classic comedy The Wind In The Willows, featuring a new stage adaptation by Zack Allen of the classic novel by Kenneth Grahame. The play will be performed August 14 – 30, Thursdays and Fridays at 7 PM; Saturdays at 1 PM and 5 PM; Sundays at 3 PM.

All the animals in The Wild Wood are concerned about Mr. Toad, whose passion for fast motorcars is quickly damaging his wallet and reputation. Toad’s devoted friends, Mr. Rat and Mr. Badger, pledge to rescue the poor fellow from his own foolish actions before he can go bankrupt or worse. Toad’s newest friend, the intelligent but shy Miss Mole, comes up with a plan that not only saves Toad but his grand mansion as well.

The play is performed by 10 talented young actors, from ages 10 to 14. The role of Mr. Toad will be played by KCT veteran Brock Mullins, who attends 7th grade at Christian Academy of Knoxville. Brock was recently seen in KCT’s The Hobbit. Mr. Rat is played by Cody Chaffins, who attends 8th grade at First Baptist Academy. Cian Bell, a 9th-grader, plays Mr. Badger, and Emma Stark, a 5th-grader, plays Miss Mole.

KCT is East Tennessee’s leading producer of stage plays for children. The Wind In The Willows is the 70th play to be produced by Knoxville Children’s Theatre.

The company is also the area’s leading producer of new works; The Wind In The Willows is the 28th original play to be created by the company. Over 9,500 people attended a KCT play in 2014.

The play is written and directed by Zack Allen. Zack has written 16 full-length plays for KCT, including 4 produced this year: Thumbelina, The Hound of The Baskervilles, Alice’s Rumpus In Wonderland, and The Wind In The Willows. Zack has acted in or directed over 100 plays in Knoxville. He performed in over 30 shows at Clarence Brown Theatre from 1984 to 1998. As a company member of the Actor’s Co-Op from 2001-05, he directed numerous shows at their Black Box Theatre. Zack also directs for other local theatre companies, having directed for Shakespeare In The Square, as well as numerous shows at Theatre Knoxville Downtown.

The show is sponsored by Home Federal Bank. Assistance was also provided by Bandit Lites, Prestige Cleaners and WBIR-TV. 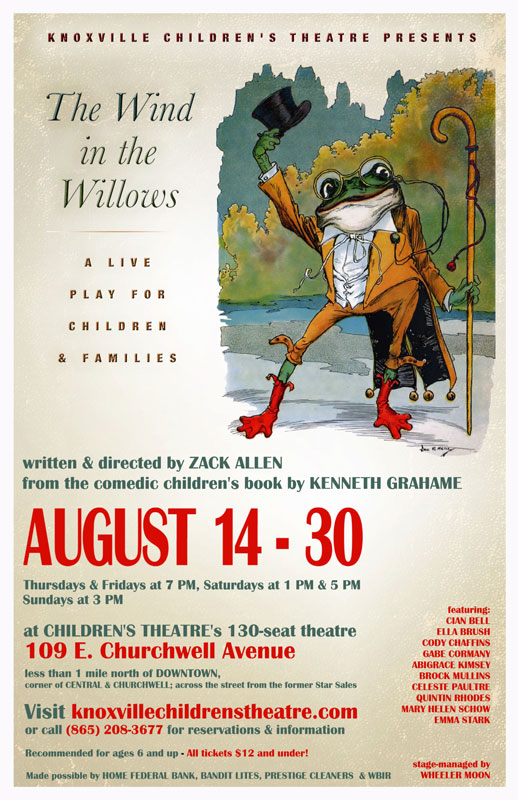