The Surprising Story of the Three Little Pigs 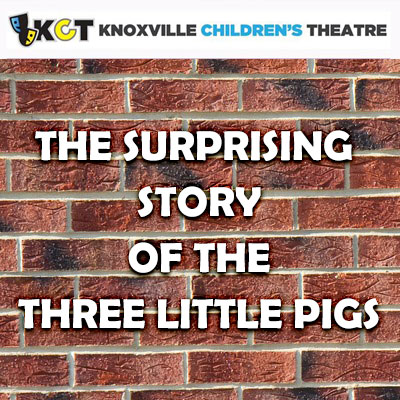 The Surprising Story of the Three Little Pigs

Knoxville Children’s Theatre, in partnership with The Ritchie Company,  will present “The Surprising Story of the Three Little Pigs” a live comic play for ages 5 and older.  The play will be performed January 20 through February 5, Thursdays and Fridays at 7 PM; Saturdays at 1 PM and 5 PM; Sundays at 3 PM.

This play, originally produced by Dallas Children’s Theatre, has been a smash-hit across the USA!  Three classic fairy tales, with three famous trios (the Little Pigs, the Billy Goats Gruff, and the Three Bears) begin in their usual “once-upon-a-time” fashion… but things change on the way to “happily-ever-after.”  The pigs imagine life without a wolf, the goats can’t face another troll, and Papa Bear has had enough of Goldilocks!  The trios join forces for a hilarious mashup of some of the world’s oldest tales!

Catherine Blevins, a senior at Hardin Valley Academy, serves as the show’s stage manager.  Wheeler Moon, a junior at West High, is the play’s scenery designer.  Quintin Rhodes, an 8th-grader at Gresham Middle, is the show’s lighting designer.  Sean Sloas will perform the duties of Production Manager.  Zack Allen is the show’s director..  KCT is East Tennessee’s leading producer of stage plays for children.