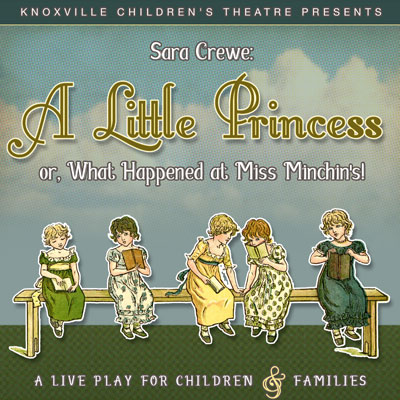 Knoxville Children’s Theatre will present Sara Crewe: A Little Princess, based on the heartwarming, rags-to-riches children’s novel by Frances Hodgson Burnett.  The play will be performed January 22 through February 7, Thursdays and Fridays at 7 PM; Saturdays at 1 PM and 5 PM; Sundays at 3 PM.

Captain Crewe leaves his young daughter Sara at a school for girls, while he goes abroad to claim his fortune in jewels.  The school is run by a strict head-mistress named Miss Minchin, who takes special care of her wealthy new student, until a stunning twist of fate changes the Fate of everyone in the school and throughout the neighborhood.

Frances Hodgson Burnett’s story remains one of the world’s most popular books for children, despite being written over 100 years ago.  It is a timeless tale of rags-to-riches, and Sara Crewe has become a role model for grace-under-pressure and undefeatable hope.

The play is performed by 11 talented young actors, from ages 8 to 14.  The role of Sara Crewe will be performed by Ella Williams, who has been seen at KCT in memorable performances in The Best Christmas Pageant Ever and Harriet The Spy.  Miss Minchin is being played by newcomer Hallie Boring, and KCT veteran Jared Watkins will play the dual roles of Captain Crewe and Mr. Carrisford.

Three actors are making their KCT debuts: Hallie Boring, Cate Harper (as Lottie), and Autumn Harbison (as the Urchin).

KCT is East Tennessee’s leading producer of stage plays for children.  Sara Crewe: A Little Princess is the 73rd play to be produced by Knoxville Children’s Theatre.  Over 9,500 people attended a KCT play in 2014.  The play is directed by Zack Allen from a script by R. N. Sandberg, licensed by Dramatic Publishing Company.

The show is sponsored by Home Federal Bank and The Comcast Foundation.  Assistance was also provided by Bandit Lites, and Prestige Cleaners. 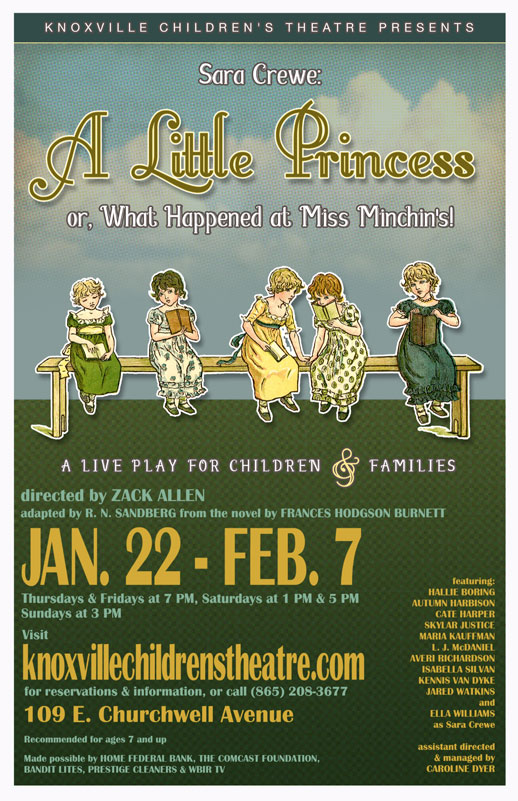