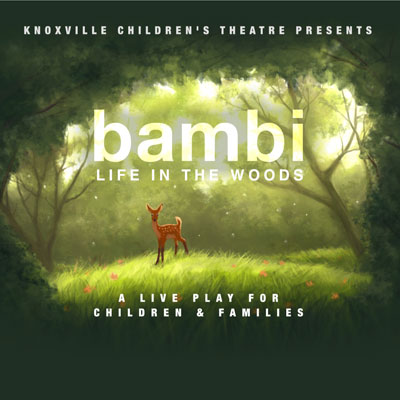 Knoxville Children’s Theatre will present Bambi, Life In the Woods, a stage adaptation by James DeVita of the classic novel by Felix Salten. The play will be performed July 10 – 26, Thursdays and Fridays at 7 PM; Saturdays at 1 PM and 5 PM; Sundays at 3 PM.

Bambi, a young forest deer, suddenly becomes heir to his father, the Great Prince. After Bambi encounters the new feelings of love, fear, loneliness and independence, he comes to understand that all of Earth’s creatures are guided by a greater force than themselves: all are dependent on each.

Intertwined in this great story is Bambi’s growing awareness of the fragility of the forest environment and the impact of human encroachment on all of the forest inhabitants.

The play is performed by 13 talented young actors, from ages 11 to 16. The role of Bambi will be played by KCT veteran Zak Terry. Zak played the title role in KCT’s The Adventures of Tom Sawyer in 2013, and more recently played The White Rabbit in Alice’s Rumpus In Wonderland last February.

The play is directed by Jennie Cunic. Jennie was KCT’s intern from 2013-14 an is currently enrolled at University of Evansville. Management duties are relegated to two area high-school students: Sydney Reed (Stage Manager) and Betsy Blumberg (Assistant Stage Manager). Emma Campbell is the staff’s Production Manager.

Bambi, Life In The Woods is adapted by James DeVita. The play is produced through special arrangement with Dramatic Publishing. The show is sponsored by Home Federal Bank, Bandit Lites, and Prestige Cleaners. 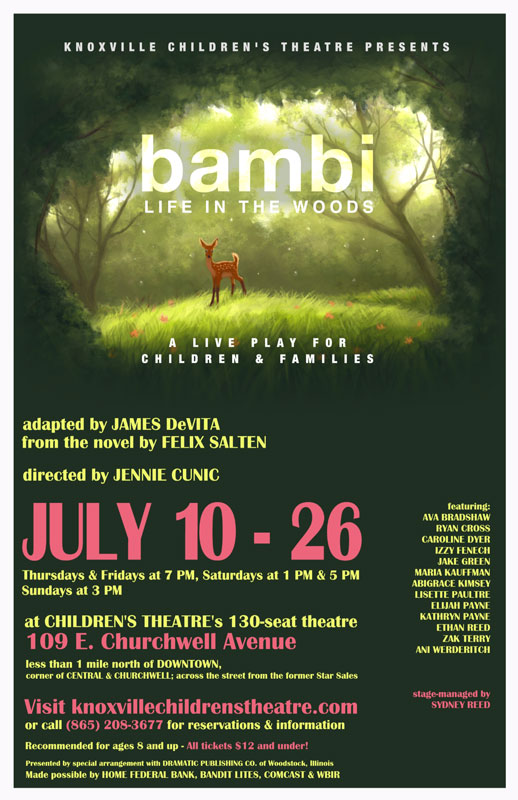