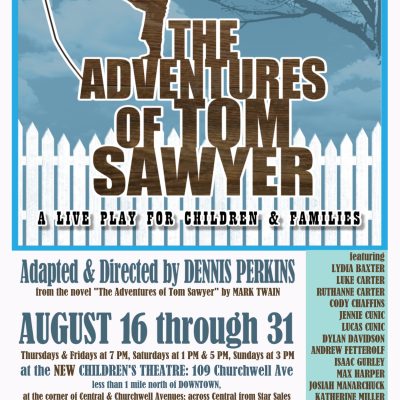 “THE ADVENTURES OF TOM SAWYER”
adapted and directed by DENNIS E. PERKINS
from the book by Mark Twain

Knoxville Children’s Theatre will present The Adventures of Tom Sawyer, a live stage play for children and families, adapted from Mark Twain’s classic novel of comic hi-jinx and thrilling adventure. The play will be performed from August 16 through August 31. KCT’s new adaptation follows Tom and his misadventures with characters that have become American legends: Becky Thatcher, Aunt Polly, Huckleberry Finn, Injun Joe, and Widow Douglas.

ABOUT “The Adventures of Tom Sawyer”
Mischievous Tom Sawyer is always getting into trouble, and his Aunt Polly is always thinking up new punishments, like whitewashing her picket fence. But Tom gets into more trouble than he bargained for when he and his buddy Huck Finn witness a violent crime committed by the cruel Injun Joe. Before the drama is over, Tom has uncovered a plot by Injun Joe, recovered some stolen treasure, and wins the heart of Becky Thatcher.

TICKETS FOR “The Adventures of Tom Sawyer”
TICKETS are $12 per person. KCT is continuing our special Adult & Child Combination rate for this production: If an adult and a child enter together, these two may be admitted for $10 each.

The play is being performed at KCT’s NEW theatre facility in downtown Knoxville, located less than one mile north of our Tyson Street location. The address is 109 E. Churchwell Avenue.

From anywhere in Knoxville: Use I-275. Take Exit 1B to Woodland Avenue East. Travel .2 miles east to Central Avenue. Turn left onto Central. Theatre is three blocks up Central at the corner of Central and Churchwell Avenues, directly across from Star Sales.

ABOUT THE ARTISTS OF “The Adventures of Tom Sawyer”
The play is performed by 20 talented young actors, from ages 10 to 18. Zak Terry plays the title role of Tom Sawyer, and Cody Chaffins performs the role of Huckleberry Finn. Both boys are veterans of several KCT productions and were last seen together in last season’s Treasure Island. Farragut High School senior Jennie Cunic plays Aunt Polly.

The play is written and directed by Dennis E. Perkins. Wade Austin provides the scenic design, and Rose Bolton will design and build the costumes. The play’s stage manager is Bearden High School junior Marianne Dodson.

The play is made possible through the generous support of Home Federal Bank, Harrigan Construction, WBIR-TV and arts-minded individuals like you.