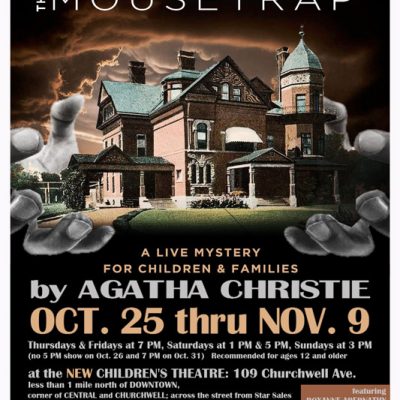 Knoxville Children’s Theatre will present a live whodunit mystery, Agatha Christie’s The Mousetrap, in a special Halloween production. The play will be performed October 25 through November 9: Thursdays and Fridays at 7 PM, Saturdays at 1 PM and 5 PM, and Sundays at 3 PM. (There is no show at 5 PM on Oct. 26 and 7 PM on Oct. 31.)

Agatha Christie’s name has been synonymous with mystery for the last 80 years. And her masterwork, The Mousetrap, is one of the most enduring plays of all time. Its original production in London’s West End has been playing non-stop since 1952 and recently celebrated its 25,000 performance. The show is also one of the most-produced plays in middle schools and high schools. The Mousetrap also has one of the most surprising twist endings of any mystery play in the history of the theatre.

About Agatha Christie’s The Mousetrap
Giles and Mollie Ralston are embarking on a new business, opening a guest house in the English countryside. But the opening is marred by a sudden snowstorm, which strands the Ralstons in the mansion, along with their five guests. As night falls, the police call and tell the new hotelkeepers that a suspect in a London murder may be one of the strangers seeking shelter there. Detective Sergeant Trotter skis to the mansion on an urgent quest: to unmask the criminal before he or she attempts to kill again.

Ticket Info for Agatha Christie’s The Mousetrap
The play is being performed at KCT’s theatre facility in downtown Knoxville, located less than one mile north of our Tyson Street location. The address is 109 E. Churchwell Avenue.

TICKETS are $12 per person. KCT is continuing our special Adult & Child Combination rate for this production: If an adult and a child enter together, these two may be admitted for $10 each.

About the Artists of Agatha Christie’s The Mousetrap
The play is performed by 8 talented young actors, from ages 12 to 18. Josiah Eakle and Alexandria Carter play Giles and Mollie Ralston, respectively. Josiah was last seen at KCT inSleeping Beauty last February, and Alex last appeared at KCT in our 2012 Halloween production,Legend Of Sleepy Hollow. Clay McCammon, last seen at KCT as Mr. Keller in 2012’s The Miracle Worker, plays the detective who comes to the Ralston’s rescue.

The hotel guests are played by Roxanne Abernathy (as Miss Casewell), Ike Hannah (as Major Metcalf), Keegan Stump (as Churchill), and A. J. Tierney (as Mrs. Boyle). The unexpected and mysterious Italian guest, Mr. Paravicini, is played by Yves Paultre, making his KCT debut.

The play is made possible by contributions from Home Federal Bank, Harrigan Construction, Kersey Family Care, Merit Construction, and WBIR-TV, as well as from individuals like you.