TALES OF A FOURTH-GRADE NOTHING 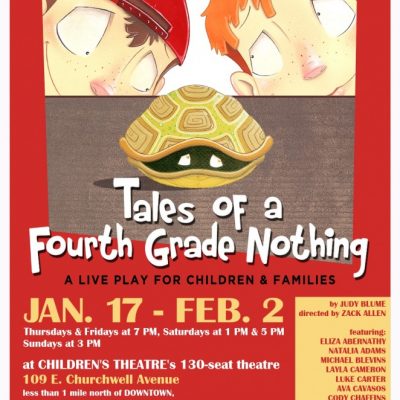 TALES OF A FOURTH-GRADE NOTHING

by Judy Blume – directed by Zack Allen
Knoxville Children’s Theatre will present a live stage version of the hilarious children’s novel Tales Of A Fourth-Grade Nothing, by Judy Blume. The play will be performed January 17 through February 2: Thursdays and Fridays at 7 PM, Saturdays at 1 PM and 5 PM, and Sundays at 3 PM.

Tales Of A Fourth-Grade Nothing began a hugely-popular series of books, detailing the lives of the Hatcher family and their friends, including Superfudge, Fudge-A-Mania, and Double Fudge. All of the uproarious adventures of Peter and Fudge come to life on the KCT stage, along with many of the characters from the series, such as Sheila Tubman, Jimmy Fargo, and Dr. Cone.

About Tales Of A Fourth-Grade Nothing
What happens when your cute little brother is sometimes a trouble-making, fussy, chaos-causing brat? Peter Hatcher feels like a “fourth-grade nothing” because everybody seems to give his brother Fudge so much attention, even if he’s behaving badly! Tales Of A Fourth-Grade Nothing follows a year in Peter’s life that is full of comic misadventures, such as the boys’ visit to the dentist, the day Fudge tried to fly, the morning Dad tried to cook an omelet, the night that Peter lost Fudge in a downtown movie theater, and much more. A faithful adaptation of one of the best books ever written about sharing life with a sibling.

Ticket Info for Tales Of A Fourth-Grade Nothing
The play is being performed at KCT’s theatre facility in downtown Knoxville, located less than one mile north of our Tyson Street location. The address is 109 E. Churchwell Avenue.

Reservations are strongly recommended for all KCT performances. To reserve tickets for the production, e-mail the number of adult and child tickets needed, along with your requested performance date and time, to [email protected] at any time. Or you may call us at (865) 208-3677 between the hours of 1 PM and 5 PM. Reservations can be placed on “will-call” and paid for upon arrival.

TICKETS are $12 per person. KCT is continuing our special Adult & Child Combination rate for this production: If an adult and a child enter together, these two may be admitted for $10 each.

About the Artists of Tales Of A Fourth-Grade Nothing
The play is performed by 17 talented young actors, from ages 5 to 12. Luke Carter plays Peter Hatcher, and Layla Cameron plays his Mom. Luke was last seen in The Adventures of Tom Sawyer at KCT, and Layla last appeared as the schoolteacher Miss Watkins in Heidi And The King. Cody Chaffins plays Peter’s buddy Jimmy Fargo, and Isabelle Hannah performs the role of Sheila Tubman.

The play is directed by Zack Allen. Ashlee Latimer is the Production Assistant. Wade Austin provides the scenic design, and Rose Bolton will design and build the costumes. The play’s stage manager is Jessica Burks.

The play is produced in partnership with Plays for Young Audiences of Minneapolis, MN, and made possible by contributions from Home Federal Bank, Harrigan Construction, Kersey Family Care, Merit Construction, and WBIR-TV, as well as from individuals like you.