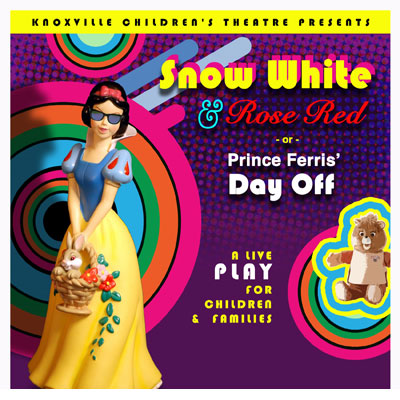 Knoxville Children’s Theatre will present “Snow White & Rose Red,” a comic parody of all things 1980’s, specifically created for children and families.  The play will be performed May 6 – 22, Thursdays and Fridays at 7 PM; Saturdays at 1 PM and 5 PM; Sundays at 3 PM.

The play’s subtitle is “Prince Ferris’ Day Off,” because the play is a witty and clever mashup of the Grimm fairy tales of Snow White and Rose Red, as well as the iconic 1980’s movie “Ferris Bueller’s Day Off.”

The show parodies 80’s movies, music and fashion, while also retaining the classic elements of the fairy tale: a magic mirror, a jealous witch, rescuing dwarves, and a handsome prince.

Younger fans will be thrilled with the comic mystery surrounding Snow White, while older audience members who survived the 80’s will find much of the show humorously familiar.

Prince Ferris decides to ditch throne duty and attend the local fair with his pal Cameron.  There, they meet up with Snow White, whose mother has forgotten her 16th birthday.  Meanwhile, Rose Red has met a magical bear named Teddy Ruxpin, who is in search of a strangely inept witch.  To find her, it will take Snow White’s dotty grandmother, two local beauticians, four misfit dwarves, and an airhead king!  It’s a totally tubular tale, dude!

Stage management duties are carried out by Betsy Blumberg, a senior at L&N STEM Academy.  Emma Campbell, a freshman at Pellissippi State, is the staff’s Production Manager.

The show is sponsored by The Comcast Foundation, The Clayton Family Foundation, Clayton Homes, and Home Federal Bank.  Assistance was also provided by Bandit Lites, and Prestige Cleaners. 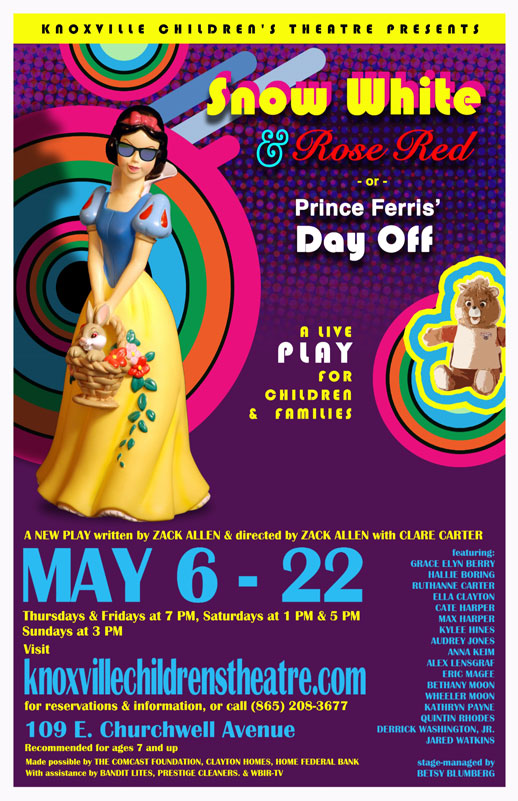