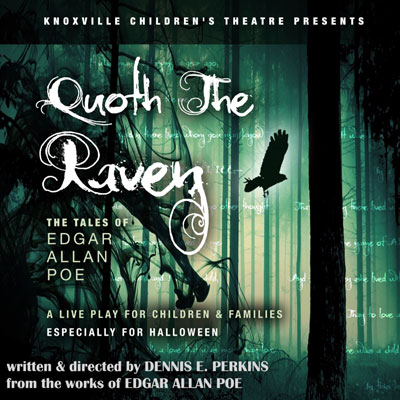 Knoxville Children’s Theatre will present Quoth The Raven: Tales of Edgar Allan Poe, a stage adaptation of the writings of Edgar Allan Poe for children and families, especially for Halloween. The play will be performed Oct. 23 – Nov. 8, Thursdays and Fridays at 7 PM; Saturdays at 1 PM and 5 PM; Sundays at 3 PM. There is only a 1 PM show on Halloween (Sat. Oct. 31).

For almost 175 years, the works of Edgar Allan Poe have given the shivers to readers of all ages.  This Halloween, KCT re-imagines what inspired this troubled genius to write his stories of terror and poems of lost love.  Join us for a literary fright night as we bring some of Poe’s most well-known and haunting works to life, including The Raven, Annabel Lee, Hop-Frog, The Cask of Amontillado, and The Tell Tale Heart. A spooky adaptation for ages 11 and up.

The play is performed by 13 talented young actors, from ages 10 to 14. The role of Edgar Allan Poe will be played by KCT veteran Keegan Stump, who attends 8th grade at Cedar Bluff Middle. Keegan was recently seen in KCT’s The Hobbit, as the wizard Gandalf. One actor, Mya Osborne, is making her KCT debut.

Management duties are carried out by two area students: Lisette Paultre (Stage Manager) and Emma Campbell. Lisette attends the L&N STEM Academy, and Emma is a freshman at Pellissippi State, is the staff’s Production Manager.

The play is written and directed by Dennis E. Perkins. He is KCT’s Academy Director and has been a director, writer and instructor for KCT since 2011. Credits include The Lion, The Witch And The Wardrobe, Tuck Everlasting, Fellowship Of The Ring, Prince Caspian: Return To Narnia, Legend Of Sleepy Hollow, Bridge To Terabithia, Adventures Of Tom Sawyer, The Giver, Disney’s Aladdin, and Shrek: The Musical Jr. He was a director and performer at the Actor’s Co-op & Black Box Theatre, has twice directed at Hungary’s Csokonai Theatre, and shared a Joseph Jefferson citation for Best Ensemble with the cast of Corpus Christi at Chicago’s Bailiwick Theatre. He is a Phi Beta Kappa and Summa Cum Laude graduate of the University of Tennessee’s College Scholars program.

The show is sponsored by Home Federal Bank and The Comcast Foundation. Assistance was also provided by Bandit Lites, and Prestige Cleaners. 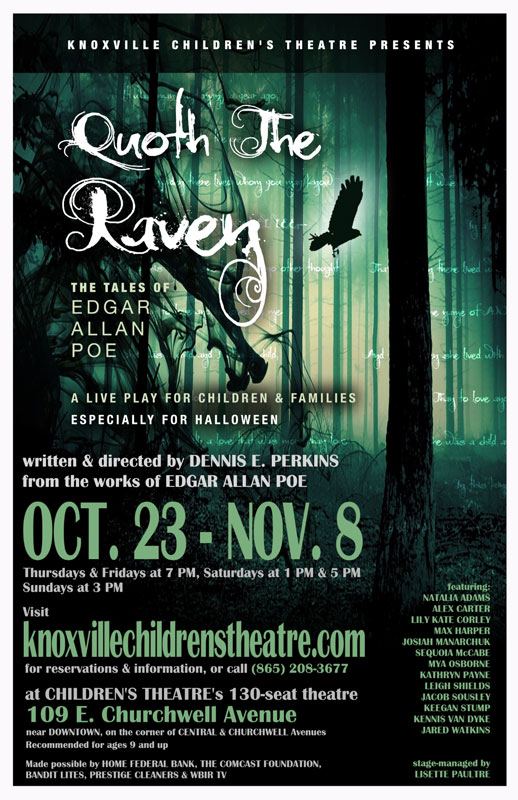