Knoxville Children’s Theatre will present “Legally Blonde: The Musical, Jr.,” a version of the hit Broadway musical specially adapted for children and families, and based on the popular MGM film..  The play will be performed July 15 – 31, Thursdays and Fridays at 7 PM; Saturdays at 1 PM and 5 PM; Sundays at 3 PM.

When Elle’s high school boyfriend, Warner, dumps her and heads to Harvard, claiming she’s not “serious” enough, Elle takes matters into her own hands.  As Elle begins outsmarting her peers, she realizes that law may be her natural calling after all.

Songs from the junior version include “Serious,” “Bend And Snap,” “Daughter of Delta Nu,” “Chip On My Shoulder,” “Omigod You Guys,” and “Legally Blonde.”

The play is performed by 21 talented young actors, from ages 12 to 17.  The role of Elle Woods is played by KCT veteran Hannah Sloas, and Warner Huntington III will be performed by Jospeh Coram, who was last seen at KCT in “Disney’s The Little Mermaid, Jr.”

Many other memorable characters from the film appear in the play, such as Elle’s friend Paulette, aerobics instructor Brooke Wyndham, and Elle’s legal colleague Emmitt Forrest, each played by Abigayle DeBusk, Alex Lensgraf, and Ethan Turbyfill, respectively.

Stage management duties are carried out by Lucas Cunic a junior at Christian Academy of Knoxville.  Emma Campbell, a sophomore at Pellissippi State, is the staff’s Production Manager.

The show is sponsored by The Comcast Foundation, Clayton Family Foundation, and Home Federal Bank.  Assistance was also provided by Bandit Lites and Prestige Cleaners.

The play is based on the novel by Amanda Brown and the film by Metro-Goldwyn-Mayer. The script was written by Heather Hach, with music and lyrics by Laurence O’Keefe and Nell Benjamin..  The play is produced by special arrangement with Music Theatre International. 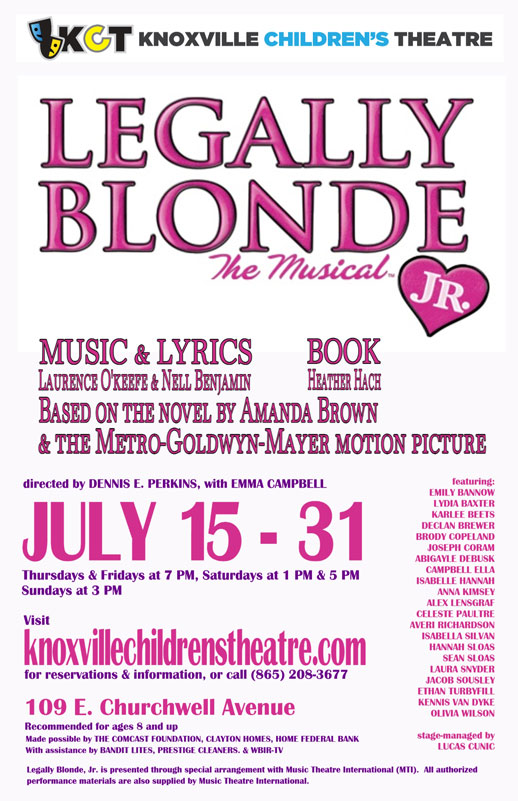