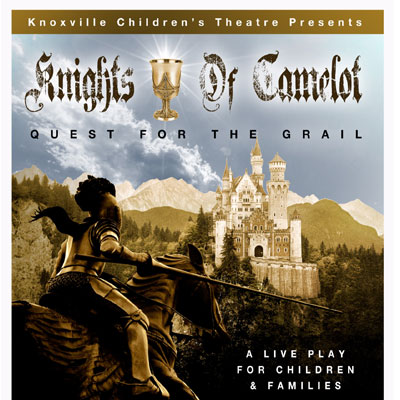 Knoxville Children’s Theatre will present a new stage adaptation of the epic, medieval legend of King Arthur: Knights Of Camelot. The play will be performed August 15 through 31, Thursdays and Fridays at 7 PM; Saturdays at 1 PM and 5 PM; Sundays at 3 PM.  The show is KCT’s 60th full-scale production and features 22 young actors in the cast.

The legend of King Arthur and the Knights of The Round Table has entertained audiences, young and old, for over a thousand years.  From the day he pulls the sword Excalibur from a large stone, Arthur has ruled Camelot.  His knights pursue all sorts of defenses of the Realm, including epic battles, heroic quests, and chivalrous romance.

King Arthur rules his Kingdom by the principle: Right is greater than Might.  Yet, within his own court, jealousy, gossip, and unkindness threaten the peace of The Realm.  When Queen Guinevere is threatened in her own garden, a young stranger accepts the challenge to avenge the Queen. He seeks the one thing that will restore peace and unity to the Kingdom: The Holy Grail.

KCT is Knoxville’s leading producer of original stage plays.  Knights Of Camelot is the 5th original full-length play by Dennis E. Perkins to be premiered by Knoxville Children’s Theatre.  The company has produced a total of 22 premieres since 2008.  Over 4,800 people have attended a KCT play this year.

The play is written and directed by Dennis E. Perkins.  Brooke Cunningham will provide the scenic design, and Rose Bolton will design and build the costumes. The play’s stage manager is Micha Haas, assisted by Derrick Washington, Jr. 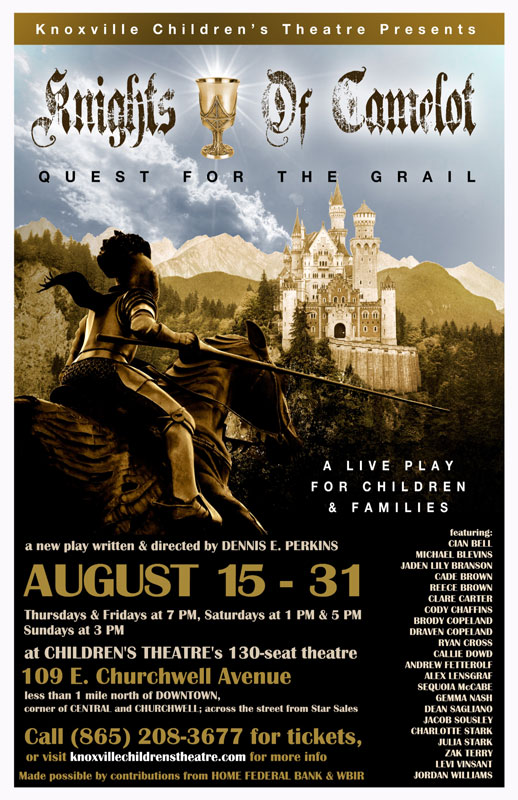