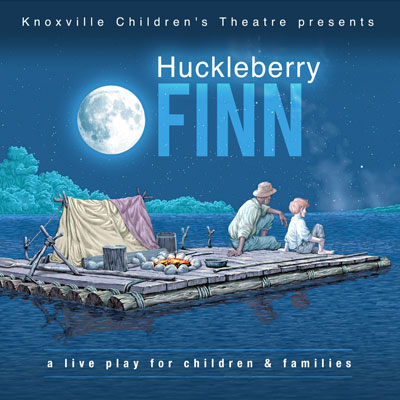 Knoxville Children’s Theatre will present Huckleberry Finn, an adaptation for the stage of the classic American novel by humorist Mark Twain. The play will be performed January 16 through February 1, Thursdays and Fridays at 7 PM; Saturdays at 1 PM and 5 PM; Sundays at 3 PM.. KCT’s 64th full-scale production features 14 young actors in the cast.

Reservations can be made using the “tickets” menu option above. Tickets are $12 per person. KCT is continuing our Special Rate for this show: Any adult and child (17 and under) who enter together can enter for $10 each, and any remaining person will be $12. Huckleberry Finn is recommended for ages 8 and up. The minimum age to enter the theatre is 3.

All payments are made upon arrival at KCT on the date of your chosen performance.

Mark Twain’s comic adventure about life on the Mississippi River bristles with satire, thrills, and drama. Huck escapes from his criminal father aboard a raft on the “Big Muddy,” joined by his friend Jim, also on the run to the North to escape from slavery.

Their adventures bring them together with two riverboat con artists, three pious sisters, and reunites him with his old pal Tom Sawyer. Along the way he rescues $3,000 in gold, helps to apprehend the con artists, and sees Jim achieve his dreams. But what will Huck become?

The play is performed by 14 talented young actors, from ages 9 to 15. Huckleberry Finn is portrayed by Leigh Shields, a veteran KCT performer seen in The Giver and The Hound of The Baskervilles in 2014. Tom Sawyer is played by Max Harper, and Minnie Harrigan and Andrew Fetterolf play the con artists, the Queen and the Duke, respectively. Derrick Washington, Jr. Plays Huck’s stalwart friend Jim.

The play is directed by Zack Allen. Candace Watson will design and build the costumes. The play’s stage manager is Clare Carter.

KCT is East Tennessee’s leading producer of stage plays for children. Huckleberry Finn is the 64th play to be produced by Knoxville Children’s Theatre. The company has produced 22 original plays since 2008. Over 9,500 people attended a KCT play in 2014. 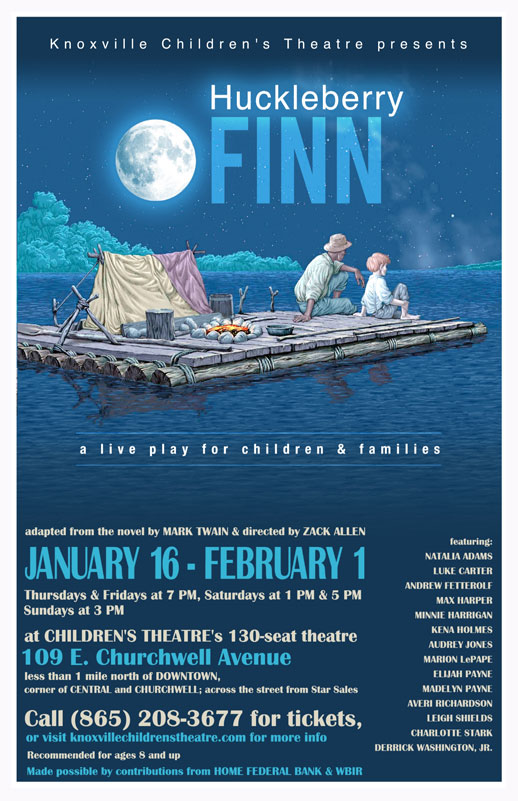