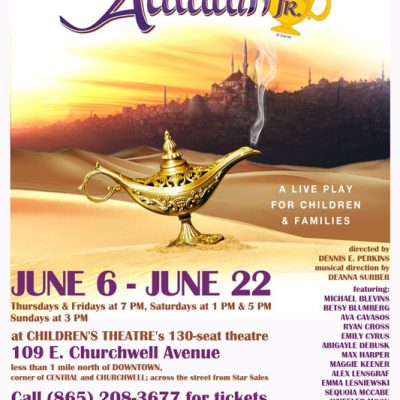 Knoxville Children’s Theatre will present a live stage adaptation of the Walt Disney Studios film Aladdin. The play will be performed June 6 through 22, Thursdays and Fridays at 7 PM; Saturdays at 1 PM and 5 PM; Sundays at 3 PM.

The show is KCT’s 58th full-scale production and features 22 young actors in the cast.

Disney’s Aladdin was the best-selling worldwide film of 1992 and is based on “Aladdin And The Magic Lamp,” a story in the collection 1,001 Arabian Nights.

The play features much of the Oscar-winning music from the film, written by Alan Mencken, Howard Ashman, and Tim Rice, including “A Whole New World” and “Friend Like Me.”

Agrabah is the City of Enchantment, a place filled with magic, mayhem and flying carpets. Only in such an exotic place could a street rat like Aladdin become a mighty prince. Jasmine, Jafar, and The Sultan, as well as all the unusual characters of the film, appeaWebsite Copyr in the charming stage adaptation from Music Theatre International.

The play is performed by 22 talented young actors, from ages 9 to 16. Ethan Turbyfill, a student at Alcoa Middle School, will play Aladdin. Ethan was last seen in memorable roles in KCT’s Little Women and Disney’s Mulan. Emma Lesniewski, a student at Seymour Middle School, will play Jasmine. A. J. Tierney, a sophomore at West High, plays The Genie.

The play is directed by Dennis E. Perkins. Isabelle Hannah is the Production Manager. Brooke Cunningham will provide the scenic design, and Rose Bolton will design and build the costumes. The play’s stage manager is Phoebe Stark.