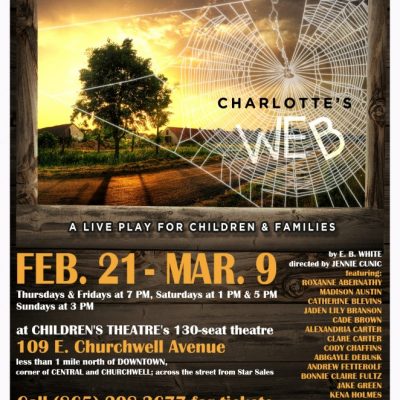 by E. B. White – directed by Jennie Cunic
Knoxville Children’s Theatre will present a live stage version of the heart-warming novel Charlotte’s Web, by E. B. White. The play will be performed February 21 through March 9: Thursdays and Fridays at 7 PM, Saturdays at 1 PM and 5 PM, and Sundays at 3 PM.

Charlotte’s Web is one of the top 100 best-selling books of all time and the best-selling children’s paperback book ever. The New York Times called it “just about perfect, and just about magical in the way it is done.” Tony-winning playwright Joseph Robinette’s touching and faithful stage version will make audiences believe this beloved book is coming to life on the KCT stage.

About Charlotte’s Web
In rural Maine, Wilbur, a young orphan pig, is loved by his owner, Fern Arable. But the pig is destined to be slaughtered for food, and as soon as he is old enough, the Arables send the pig to his fate on the Zuckerman family farm. A lonely, childless spider named Charlotte, who lives in a dark corner of the Zuckerman’s barn, takes pity on the pitiful little pig and decides to do what she can to save his life. Wilbur is grateful for this mysterious mother figure, but the act of true motherhood will come at a costly price for the tiny spider.

Ticket Info for Charlotte’s Web
Reservations are strongly recommended for all KCT performances. Reservations can be placed on “will-call” and paid for upon arrival.

To reserve tickets for the production, e-mail the number of adult and child tickets needed, along with your requested performance date and time, to [email protected] at any time. Or you may call us at (865) 208-3677.

TICKETS are $12 per person. KCT is continuing our special Adult & Child Combination rate for this production: If an adult and a child enter together, these two may be admitted for $10 EACH.

The play is being performed at KCT’s theatre facility in downtown Knoxville, located less than one mile north of our Tyson Street location. The address is 109 E. Churchwell Avenue.

About the Artists of Charlotte’s Web
The play is performed by 21 talented young actors, from ages 9 to 16. Kayla June Nobbe, a KCT veteran performer who was last seen in Disney’s Mulan, plays the part of the motherly spider Charlotte. Madison Austin, one of KCT’s most experienced actors, performs the role of Wilbur. Kena Holmes will play the part of Fern Arable, and Cody Chaffins and Roxanne Abernathy play the Zuckermans.

The play is directed by Jennie Cunic, a senior at Farragut High School. Jennie made her KCT debut as an actor in Charlotte’s Web, when KCT produced the play in 2009. Since then, Jennie has completed a year-long KCT internship and become an accomplished director, having helmed last season’s Sleeping Beauty.

Liel Kirk is the Production Manager. Kiernan Bensey and Brooke Cunningham provide the scenic design, and Rose Bolton will design and build the costumes. The play’s stage manager is Wheeler Moon, who will also provide the lighting design.

The play is produced under an arrangement with Dramatic Publishing, and made possible by contributions from Home Federal Bank, Harrigan Construction, Kersey Family Care, and WBIR-TV, as well as from individuals like you.