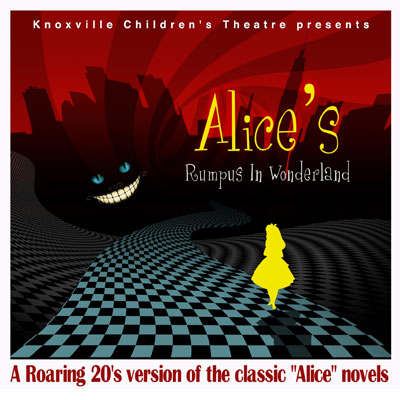 Knoxville Children’s Theatre will present Alice’s Rumpus In Wonderland, the premiere of a new stage adaptation of the classic fantasy novel by Lewis Carroll. The play will be performed February 20 through March 8, Thursdays and Fridays at 7 PM; Saturdays at 1 PM and 5 PM; Sundays at 3 PM.

KCT’s 65th full-scale production is directed by A. J. Tierney, a West High School junior, making her directorial debut after a year-long internship.

KCT’s farcical new adaptation of Lewis Carroll’s “Alice In Wonderland” and “Alice Through The Looking-Glass” re-imagines the story in the Roaring 1920’s, the era of flappers, magicians, and madcap Manhattan-ites.

Reservations can be made using the “Tickets” option above. All tickets are $12 or under. Alice’s Rumpus In Wonderland is produced for ages 5 and up.

Backstage at the ballroom of the Waldorf-Astoria Hotel in 1925, Alice has lost a white rabbit named Mr. Pepper. The rabbit belongs to Harry Houdini, the great magician who is Alice’s mother’s boss.

After an accidental knock on the head while chasing the rabbit through Houdini’s trick mirror, she finds herself in the hotel elevator, and Mr. Pepper is the elevator operator. Down, down, down they go… to Wonderland.

All of the beloved characters from the novels show up, including the Cheshire Cat, the Mad Hatter, the March Hare, Humpty Dumpty, the Dormouse, the Queen of Hearts, and Tweedledum and Tweedledee. In a rip-roaring 1920s fashion, they create a regular rumpus!

The play is performed by 18 talented young actors, from ages 9 to 16. Alice is portrayed by Ruthanne Carter, a veteran KCT performer whose last lead role was as Matilda in 2012. Catherine Blevins plays the dual role of Alice’s Mother and “the Chelsea Cat.”

Caroline Dyer also plays dual roles of a Millionairess at the Waldorf and the Queen of Hearts. Callie Dowd performs the role of the Mad Hatter.

The play is directed by A. J. Tierney, a junior at West High School junior. A. J.’s year-long internship with the company included work as props mistress, stage manager, and production manager. In October 2014, she co-directed The Hound of The Baskervilles, choreographing the numerous wordless sequences in the play. This is her directorial debut.

Rose Bolton will design and build the costumes. The play’s stage manager is Randy Thompson, a veteran of Knoxville theatre, on-stage and off. 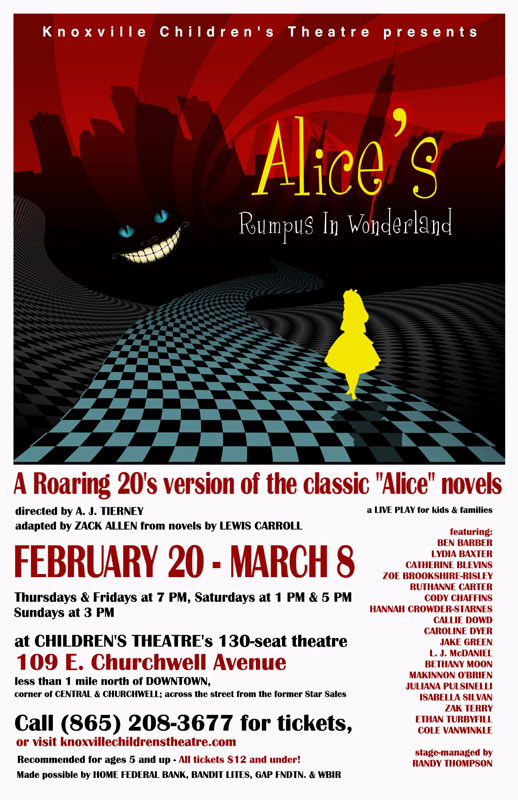